Richland Center, WI:  On June 30, 2018, a strong storm hit the area. Due to the strong winds associated with the storm, several trees and powerlines were knocked down leading to approximately 600 households without power. There were no injuries reported. Richland Center Emergency Management, Richland County Emergency Management and Richland County Health & Human Services worked to ensure the safety of any residents that may have been negatively impacted as a result of the power outage, particularly those utilizing medical devices requiring power such as oxygen concentrators. Partnering with the Salvation Army, all those residents identified as needing assistance were able to sleep well knowing their oxygen was not going to run out overnight. Thanks to the City Utilities of Richland Center and their partners working through the night, nearly all households had power restored within 12 hours despite the widespread damage.

Richland County Emergency Management encourages everyone to be prepared for emergencies such as this. Though the power was only out for a short amount of time with this incident, it could have been far worse. Knowing what to do before, during and after an emergency is a critical part of being prepared and may make all the difference when seconds count. Our emergency responders do an incredible job of keeping us safe, but they cannot do it alone. We must all embrace our personal responsibility to be prepared, and in doing so, we contribute to the safety and security of our communities as well. So make a plan; you can find a sample plan and much more on the Richland County Emergency Management website. Create a kit with any of the emergency supplies you might need, like flashlights and batteries, non-perishable food, etc. Knowing what to do in an emergency can be the hardest part, but having a plan and a kit to enact it can mean the difference between feeling helpless and feeling confident.  For more information, visit the Richland County website at em.co.richland.wi.us.

Heavy rains have caused more road closures today. We will continue to update the map as information is received. Stay alert to changing conditions. Turn Around, Don’t Drown. 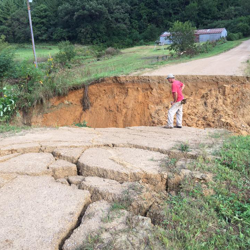 Current assessments indicated that the county sustained $420,000 in damages during the flooding late last week. These damages, though significant, are unlikely to qualify for FEMA assistance. There may be some funds available through State emergency programs to assist with infrastructure repairs such as to roads and bridges.

This flooding has often been compared to recent flood events throughout the State, such as in Buffalo and Trempealeau counties, as well as the major flooding that hit the region in 2007. Similar to the Richland County flooding, neither Trempealeau nor Buffalo County incurred enough damages to qualify for federal aid. In comparison to the 2007 flooding, there was a significant difference in the assessed damages. While several roads were impacted in the recent flooding, the flooding in 2007 incurred a staggering $5.6 million in damages to buildings and infrastructure.

Though there is unlikely to be financial assistance made available through the State or Federal governments for home owners, individuals who are seeking assistance are encouraged to call Richland County Emergency Management at 647-8187. They may be able to assist you in filing a claim with your insurance, acquiring a cleanup kit if you have not gotten one already, and connecting you to other resources as available. Red Cross cleanup kits have been made available at the Yuba Coop, Turbo’s in Hub City, the Natural Bridge Store in Rockbridge, the Boaz Community Building, and the Richland County Emergency Management office.

Richland County, WI:  The flash flooding that began in the northern part of Richland County on the early morning hours on September 7th is now impacting the City of Richland Center and southern portions of the county along the Pine River.

Please use caution when traveling in areas of the County that have been impacted by high water. Many roads may still have high water crossing over them or may be covered with mud and flood debris creating hazardous travel conditions. Motorists are also encouraged to be conscientious of road crews who are doing emergency repair work to make roads accessible throughout the impacted area. Remember “Turn around, don’t drown”!

Damage assessments are ongoing. Early estimated damage to public infrastructure is just over $300,000 throughout the entire county. Emergency Management encourages individuals impacted by this flood event to photograph and document any damage to their primary residence. Thorough documentation of damages aids individuals in experiencing a more favorable recovery process. Individuals who wish to report damage to their primary residence may call 608-647-8187.

We encourage the public to monitor their favorite media outlets to stay informed of changing road and weather conditions. 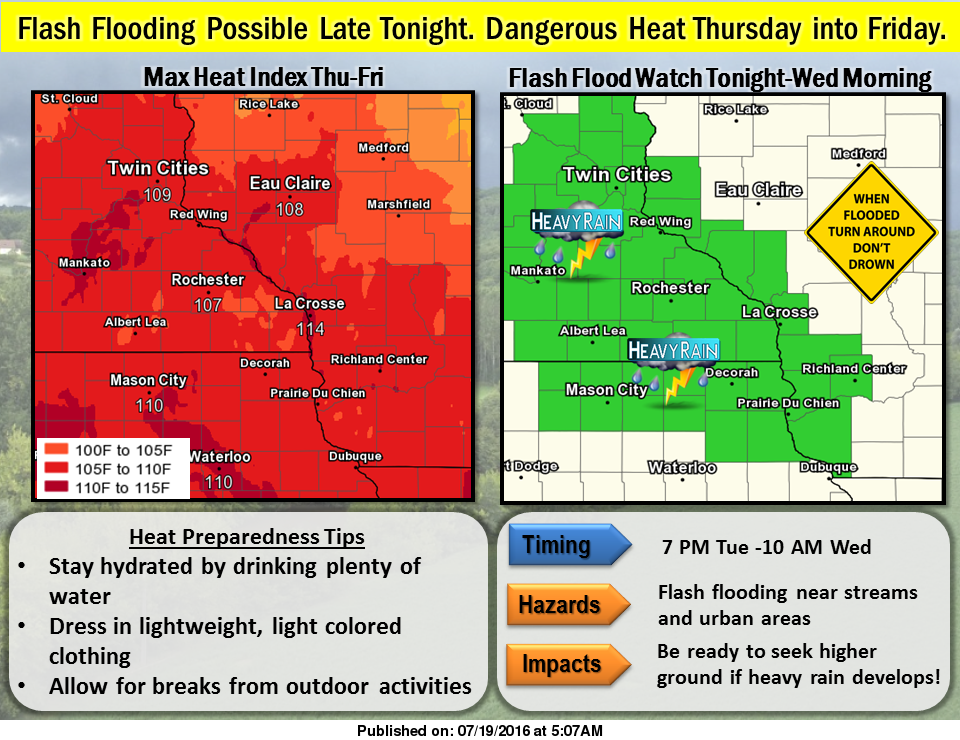 Thunderstorms could produce heavy rainfall across parts of the area late tonight into Wednesday morning which may lead to flash flooding. Be prepared to seek higher ground if you are in a flood prone area. Those camping near streams or coulee areas should be alert for rising water levels and possible flash flooding. Hot and humid conditions are expected Thursday into Friday when afternoon heat index values of 100 to 115 are possible. The worst conditions are expected Thursday afternoon.