There are two main types of lighting: intra-cloud lightning and cloud-to-ground lightning.

Intra-cloud lightning is an electrical discharge between oppositely charged areas within the thunderstorm cloud. 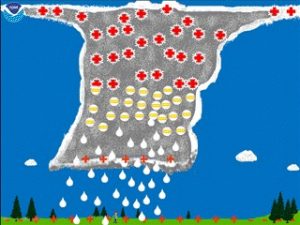 Each cloud-to-ground lightning flash consists of one or more leaders followed by one or more return strokes. The leader is the initial step in the lightning flash and establishes the conductive channel that the electrical discharge (lightning) will take. There are different types of leaders. The most common type of leader is the negative stepped leader. Once a charged leader makes a connection with the ground, the return stroke occurs. The return stroke is simply the rapid discharge of electricity that has accumulated on the leader. We see this discharge as the bright flash of lightning

To see slow-motion video of lighting in action, check out: http://www.lightningsafety.noaa.gov/science/science_slow_motion_flashes.htm