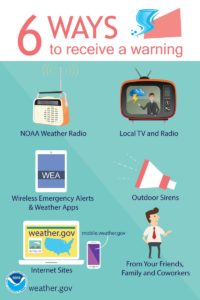 (Richland County, WI) –   Schools, businesses, families, and individuals have two opportunities to test their emergency plans during statewide tornado drills on April 20, 2017. The drills are part of the annual spring severe weather campaign to encourage everyone in Wisconsin to be ready for possible tornadoes and severe weather.

According to the NWS, Wisconsin averages 23 tornadoes annually. Last year, there were 16 tornado touchdowns in the state. All of the tornadoes were either an EF0 or EF1. However, it’s not a question of if we will have a violent storm, it’s a matter of when.

Any changes will be issued to local media as well as the following sites: