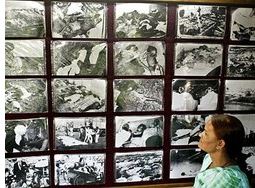 The Emergency Planning and Community Right-to-Know Act (EPCRA) was passed by Congress in response to concerns regarding the environmental and safety hazards posed by the storage and handling of toxic chemicals. These concerns were triggered by the 1984 disaster in Bhopal, India, caused by an accidental release of methyl isocyanate.

On Sunday, December 2, 1984, the 100 workers on the late shift at Bhopal, India’s Union Carbide pesticide plant were in the process of making the pesticide Sevin. This involved mixing carbon tetrachloride, methyl isocyanate (MIC) and alpha-napthol. Over the next 12 hours, a series of astonishing errors led to disaster.

The MIC at the plant was stored in three partially buried 15,000-gallon tanks. When there was a problem with one of the tanks, nitrogen was forced in to extract the MIC. However, on this day, the process was not working correctly and both MIC and nitrogen were leaking. At about 11:00 p.m., the gauges began to indicate a dangerous level of pressure in the tanks, but the workers thought the instruments were malfunctioning and took no measures to alleviate the problem. By 11:30, the workers in the vicinity of the tanks were having a physical reaction to the leak, a feeling that many were familiar with because it happened with some frequency. Even then, Shakil Qureshi, the supervisor, decided to wait until after a tea break to look into the situation. By then, it was too late, and panic ensued as an explosion rocked the plant at approximately 12:15 a.m.

Firefighters attempted in vain to use a curtain of water to stop the gas from escaping the plant. The gas simply flowed over the top of the water. A piece of equipment called a vent gas scrubber, intended to prevent toxic gas from spreading, completely failed to operate. In the midst of the chaos, the drivers of the emergency buses ran away instead of driving the workers to safety. Even worse, the plant failed to inform local authorities immediately, later claiming that the phones weren’t working.

People living in the vicinity of the plant were close enough to hear the alarms but ignored them on December 3 because alarms at the plant were so frequent. The cold weather that evening kept the gas close to the ground as it silently swept through Bhopal. Anyone who was already weak or frail was affected most seriously. Exposure to the gas caused vomiting and difficulty breathing. When the gas hit the train station, stampedes resulted as people tried to outrun it. Victims flooded the area hospitals, which were not prepared for the onslaught. The best and most effective treatment was a simple wet cloth over the face, but virtually none of the medical personnel dispensed this information.

An exact casualty count was impossible to determine in the aftermath of this disaster but most estimates place the death toll at over 2,000. An estimated 200,000 people were affected in some way by exposure to the gas. Some were blinded; others experienced serious sleep or digestion problems following the disaster. About 10-20 percent of those exposed were still suffering serious problems, such as memory loss and nerve damage, a year later.

When Union Carbide officials arrived in India following the Bhopal disaster, they were arrested. None were convicted, despite evidence suggesting that management was substantially negligent in the management of the plant.